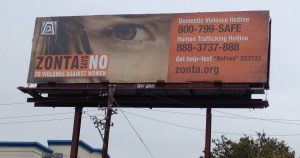 Gender equality is a basic human right and its achievement has immense socioeconomic implications. Yet, gender inequalities are deeply rooted in every society.

Sustainable Development Goal No. 5 is to achieve gender equality and empower all women and girls. While progress has been made, no country in the world has achieved gender equality.

In 2019, the SDG Gender Index found that not one country is on track to attain gender equality by 2030. The Global Gender Gap Report 2020 estimates it could take 99 1/2 years. Zonta International has spent 100 years advocating for gender equality and continues to fight for the cause.

Zonta and its clubs advocate on a variety of issues related to gender equality and women’s empowerment through:

In addition to our advocacy efforts, Zonta’s education programs and international service projects  work to empower women and provide them opportunities to live on an equal basis as men.

Installation of billboard highlighting Zonta’s campaign against domestic violence and providing phone numbers for National Domestic Violence hotline and National Human Trafficking hotline.  This billboard was located in Austin from 2015 – 2018 and, will, hopefully, be up again soon.

The Zonta Club of Austin participates in many service areas such as:  volunteering for GirlStart, GEN Austin, Girl Scouts, TruthBeTold, sending requests for congress members to pass child marriage regulatory changes and the Equal Rights Amendment. Bringing awareness of human trafficking thru our annual Poetry Slam to bring Awareness of Human Trafficking.  Supporting females in the film industry by partnering with LunaFest and Chicken & Egg Productions.

https://zontausa.org/about-zonta/usa-caucus/    For more information on Advocacy